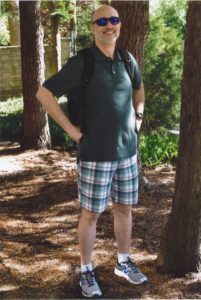 This series of posts is the journal of Pastor Dave Denoon, as he reflects on a process of renewal for himself in our Year of Renewal 2017. An accompanying series by church members may be of interest to you as well, and is available for reading (link).

During the summer of 2017, I traveled with my family to Paris, numerous places in Ghana, then to Dakar, Senegal, and finally to Norway. This was all thanks to a Clergy Renewal Grant provided by the Lilly Endowment through Christian Theological Seminary. I am unutterably grateful to the Lilly Endowment and for all those in my congregation who participated, first, in working with me to compose the grant application and, then, in offering leadership toward a successful Renewal not only for myself but for my faith community.

The focus of the sabbatical was, of course, rest and a break from the routine of the past thirty years that I have been working as a pastor (I was ordained in 1993 but began serving churches while in college, ten years earlier). Since becoming the father of an African American, I have found it helpful – of interest and of necessity – to learn about what my seminary called, The Church and the Black Experience. Hence, developed our itinerary of rest and study.

My wife, 10-year-old daughter, and I were in Paris from 5 to 12 June. The next two weeks we spent in Ghana – the first 5 days at a resort in Elmina, near the Elmina and Cape Coast slave castles (two of roughly thirty fortress/trade centers that were constructed by the Dano-Norwegians, Portuguese, Dutch, and British along “the Guinea Coast” and used in the transAtlantic slave trade) and Kakum National Park. My friend and former parishioner the Rev. Gershon Dotse, a clergy of the Evangelical Presbyterian Church in Ghana, picked up the three of us from Elmina and showed us around his homeland – with stops in Tema (unscheduled but necessary due to a late-night Friday traffic jam), Sogakope, Hohoe, Ho, and Accra.

On 26 June we flew to Dakar, Senegal, where we visited Goree Island and Maison des Esclaves, as well as the Monument de la Renaissance Africaine. We only toured there on the 27th. The 28th we spent the day poolside at a nearby hotel. The last two days we simply rested at our boutique hotel, for a great part exhausted emotionally and physically by the experiences of the previous two weeks.

From 1 to 6 July we were with friends in Norway, for the quietest Fourth of July any of the three of us have ever spent. But Maura and Knut afforded us a place and time to begin reflecting with others about our experiences in Africa – the contrasts with America, the effects of the colonizers and empire builders, the need and the bounty of sub-Sahara, and what, if anything, in the way of restorative justice that might be necessary or useful to those places. They dropped us off in Oslo, where we spent two nights before returning to St. Louis, the day of 8 July.

6 June, The Incident at Notre-Dame

7 June, The Playground at Notre-Dame

8 June, Versailles – Not Our Cup of Tea

9 June, Montmartre and the Crisis of Paris Noir

12 June, We arrive in Ghana

A Perspective on Beds and Baths

13 June, A Day at the Coconut Grove

14 June in the afternoon, Getting in Touch and Feeling My Age

19 June, A Day on the Volta – River Tour and Akosombo Dam (Sogakope to Hohoe)

23 June, An Open Letter to My Friends in the African Methodist Episcopal Zion Church (Ho)

24 June, Tours: Accra and the Memorials to DuBois and Nkrumah