A Brief History of First Congregational Church of Webster Groves

The First Congregational Church of Webster Groves was founded on January 31, 1866, when ten residents – most of them New England transplants who lived at the settlement of Webster Groves – signed a Covenant binding them together as a Christian community.

Until that time, those same ten – along with practically every person for at least a mile around – had been members of the Rock Hill Presbyterian Church. With the growth of their community, it had become clear to the Rock Hill Presbytery that a new church would be needed to serve the people in their vicinity, and plans had been in the works for about a year to generate a new Presbyterian community there.

Those who had moved to the area from New Hampshire, Massachusetts, and Connecticut, however, for the most part remember the Congregational churches of their youth – free-standing and self-determining Christian associations they felt were more in keeping with the structure of the First Century Church the disciples of Jesus had created.

Congregationalists would have recognized in the spiritual freedom of Christ’s followers the inherent equality and dignity of all human beings and their commensurate civil rights, whereas the Rock Hill Presbyterian community had continued to welcome slaveholders into membership. Despite the fact that the Rock Hill church had permitted the slave laborers of white masters and mistresses to worship with them, and despite the fact that the slave members had in 1845 volunteered their labor on Sundays to install the roof atop that church’s walls (which they had constructed on weekdays), the black folk had been seated at the back of the sanctuary and segregated.

Now, in 1866, a few months after the end of the Civil War, the Congregationalists were of the opinion that they had kept silent for too long in the presence of conformists to the sinful status quo of slavery.

At their initial gathering, those original ten expressed an invitation to all “the Christians at Webster Groves” to join them in the formation of this new church, but loyalists to the Presbytery’s plan for its new church scuttled any hopes at the “First Church” of Webster Groves would be the only church there.

In February, worship services began in the Chapel Grove Seminary building – an elementary school that had been established by three of First Church’s original members for their daughters, a couple of years before. A bell tower was attached to the school building, to house a grand bell purchased by William M. Plant and the employees of his Plant Seed Co. 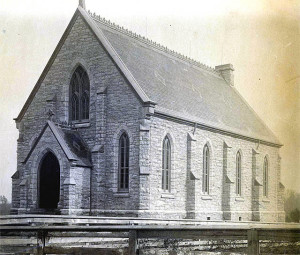 By April 1866, a movement had begun among the members to lay the groundwork for the formation of the First Baptist Church. This would be a gathering of African American Christians who resided in the hillside neighborhood of Porter’s Subdivision. First Church members, the former missionaries Rev. William & Clementine Porter, had divided their property so that newly freed blacks could homes with theirs alongside the Union Pacific tracks.

At First Church’s behest, the Porters established with two other members of the church and two members of Webster Groves Presbyterian (founded in March 1866), a Board of Directors for the First Baptist Church. The original board members sold their seats at $25 apiece to the Subdivision residents, so that the African American church would be led by its own members and a Building Fund established. First Baptist began meeting in November 1866 in a building at the northwest corner of the Subdivision. 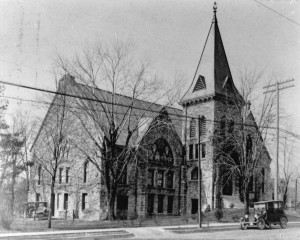 Shortly after the incorporation of Webster Groves as a city in 1896, Rev. Sutherland stepped aside due to health concerns. He was succeeded by the dynamic and oftentimes controversial Rev. Charles L. Kloss who, in 1900, drafted a new “Creed” for the congregation to affirm. Remarkably basic in its statement, the generality of Kloss’s Creed matched well the broad number of religious perspectives his church welcomed:

I believe in the Fatherhood of God and the Brotherhood of Man. I believe that Jesus is the Way and the Truth and the Life. I believe in  the clean heart, the unworldly life, and the service of love He taught and exemplified. I accept His Spirit and His teaching.

First Church would speak these words nearly every Sunday for 84 years. Church members stopped repeating it only when the congregation became divided over the Creed’s lack of inclusive language representing God.

Interesting in the meantime have been a number of developments that have expressed the church’s dedication to equality and dignity of all:

We who are called of God into this Christian community covenant together:
To seek to know the will of God,
To experience the joy and struggle of discipleship,
To proclaim in word and deed the love of Christ, and
To work for peace and justice among all people.
We trust God’s promise of grace and forgiveness, and the presence of the Holy Spirit in our trials and rejoicing.

The United Church of Christ

First Church is affiliated with the United Church of Christ, which was formed out of a merger of four strains of Christianity (Congregational, Christian, Evangelical, and Reformed) important to the history of the wider church and the nation.

Our faith forebears were involved in their church and in their world.  They hosted the Boston Tea Party at Old South Congregational Church in 1773, and hid the Liberty Bell beneath the floor in Zion Reformed Church in Allentown, Pennsylvania, when the British took Philadelphia in 1777.  Pilgrims were the earliest Congregationalists.  They established the first university in the New World when they founded Harvard in 1636.  The early church people were active in missions.  At the end of the Civil War, the Congregationalists founded over 500 schools and colleges for the newly freed slaves.